I was doing load testing on instances earlier this week to see how our autoscale policies worked out and noticed something strange. Whenever traffic was getting too high, a cloudwatch alarm kicked off the launch of a new instance (rightly so), and then all of a sudden, nearly ALL of the requests were being routed to this new instance, which wasn’t completely done provisioning yet. Nginx threw a flurry of 502s’ while our gateway was setting up, but the ELB, for some strange reason, threw nearly all our requests at that specific instance – instead of the 10+ others that were up – why?

After some digging, I realized it was a mix of 2 things – but first it’s useful to understand how AWS performs their health checks. The TCP health check is :

TCP is the default, specified as a TCP: port pair, for example “TCP:5000″. In this case a healthcheck simply attempts to open a TCP connection to the instance on the specified port.

Which means that if you have an API that’s public-facing the internet, this is no good. Suppose Nginx or Apache is done setting up, but Rails or Django is not ready yet? Well according to the description, this would pass the test. First thing to fix : create a specific testing url for health check (in nginx in my case – I created a /test/health path) to make sure we don’t put instances that are not ready yet behind the load balancer.

For HTTP or HTTPS protocol, the situation is different. You have to include a ping path in the string. HTTP is specified as a HTTP:port;/;PathToPing; grouping, for example “HTTP:80/weather/us/wa/seattle”. In this case, a HTTP GET request is issued to the instance on the given port and path. Any answer other than “200 OK” within the timeout period is considered unhealthy.

So the HTTP(S) health check actually need to return a 200 OK status code, which gives us much more control. So even if nginx is ready but our gateway isn’t, our 502 will cause the health check to fail.

So that explained why some requests failed, but how come nearly all of them did? First, here’s a few interesting things about ELBs :

Ah ha! Since returning a 502 code is surely faster than anything else my other instances were doing, the ELB probably thought that this machine was way faster than all others and passed over all the requests to it – very bad. 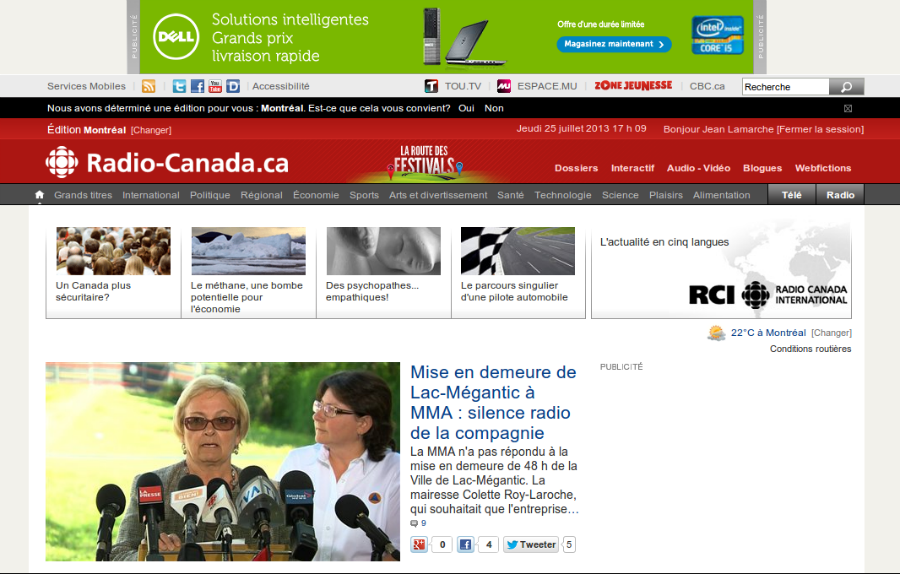 Meet Radio-Canada.ca, Canada’s French national news website. Essentially the cheap copy of CBC.ca, the sexy English counterpart. Being one of ~7.5 million francophones of Quebec, I’ve used this site a lot, and it’s been frustrating. I’m not sure if it’s actually the worst national news website in the world, but if not it must be close. This site has a bad URL, it’s painfully slow, extremely buggy, insecure and uses outdated technology. Don’t believe me? I decided to poke around for about an hour :

look at this URL, just look at it. Now, R-C also controls national radio, and every time they spell out the URL out loud I choke on my coffee and die a little bit inside. It is that hard to get a shorter, hyphen-less URL? Please? (EDIT : I found one! see “bonus” section at the end!)

Here’s a screenshot of the nextwork panel open from Chrome’s developer tools :

As if this wasn’t enough, have a look at this screenshot from Firefox’s debug pane : 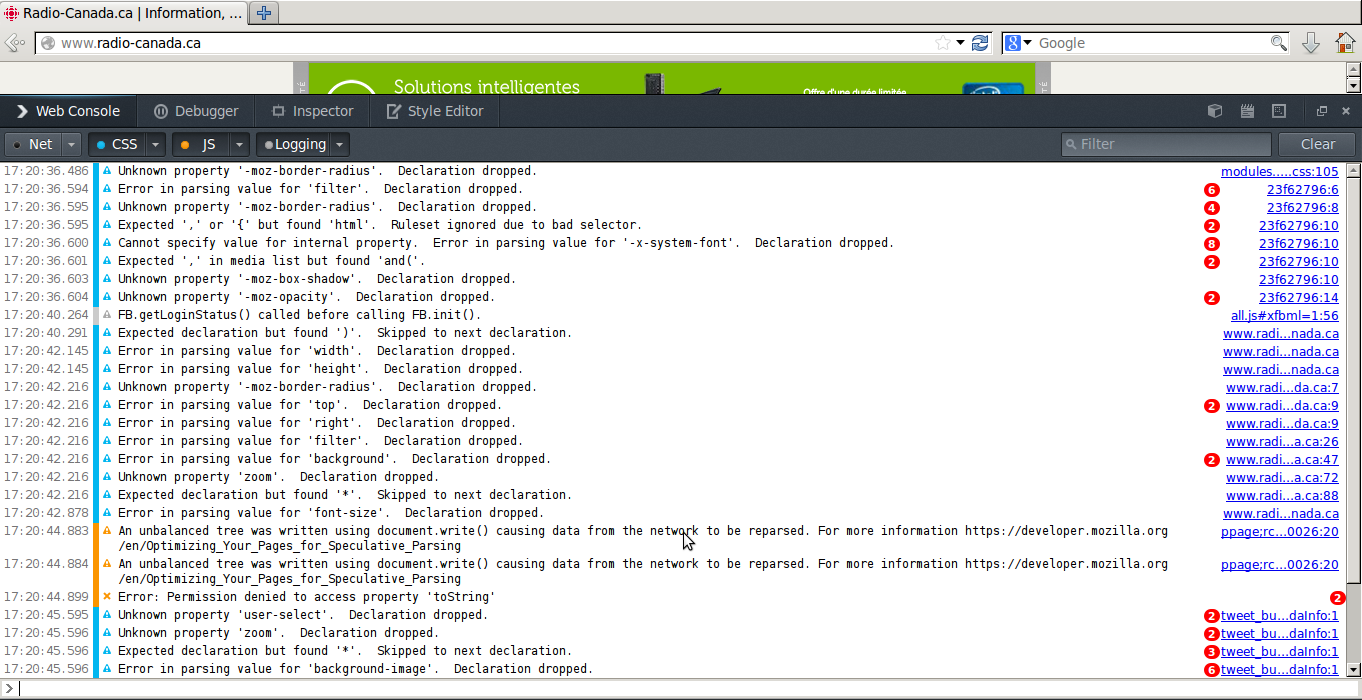 There are more JS errors in there than the scrollbar can show me. Seriously?

All these things slow the site down to a crawl. But as if it wasn’t enough, R-C loves to use 3rd-party scripts to engage their readers! A quick list of SOME of the script files downloaded :

Why not wait until I actually click an article before throwing all this crap at my browser?

Even google’s PageSpeed scrore (77) page make this site look like it was hosted on geocities (or neocities now?). Check out the list of redirects! :

Mental! And none of the static images have an expiry header! (100+) 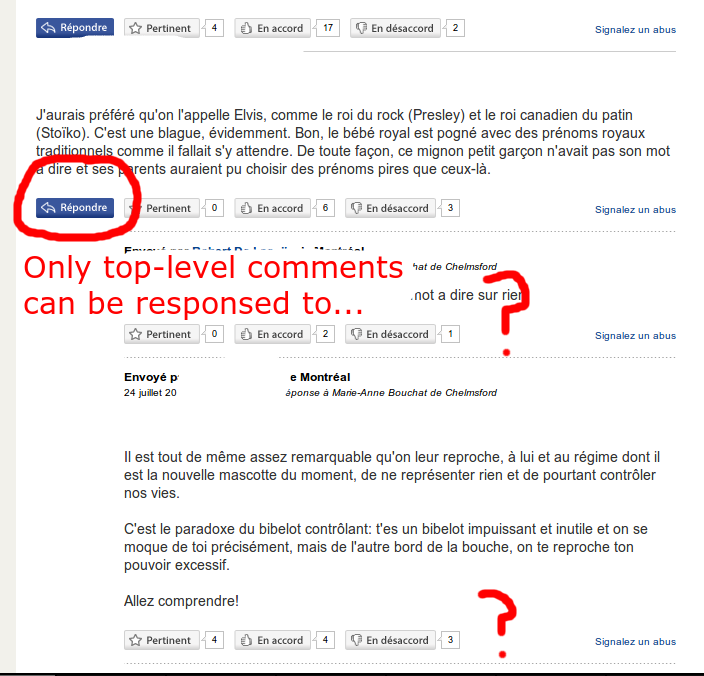 I’m NOT a security professional, but I’m pretty sure this site is messed up.

Browse some more through console URLs…OH! “api.radio-canada.ca”, looks like they have an API (at least internal?), let’s click it!

2. some important sections are not https-enforced:

Register page : non-https and https are actually both valid. Same with the “user” page, which can be found https here or non-https here (with an added bonus, for whatever reason, you get the banner included on the non-http version!). I mean…how hard is it to disable port 80? I can only imagine all the nasty things you could do with ssl-strip!

Choosing technologies for your website is always difficult, but it seems like R-C settled on a combo of Microsoft’s IIS 7.5 and aspx pages. I’ve never used IIS myself but I have done asp programming, and I know it’s a goddamn mess. I work in the startup world, and I’ve never heard of anyone using IIS, but there might be a good reason for them to do so? Or maybe not, I don’t really know.

Javascript easter eggs!
Once in a while I click in the comments, open my dev console, close it (not sure) and I get this pop-up! 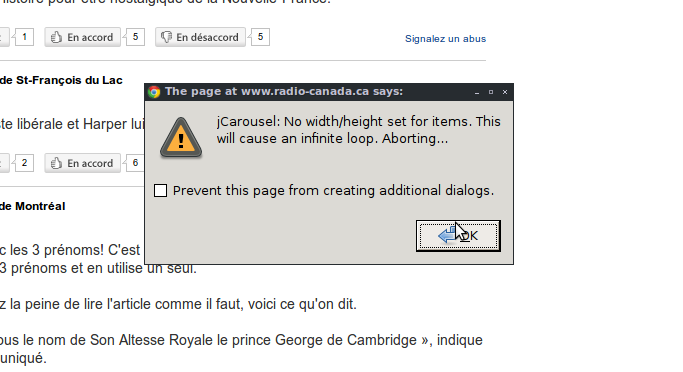 I’m pretty sure this feature has been there for a while, I just can’t figure out the correct combo. Help?

#2 CNAMED urls! : I was playing around checking what their hostnames were resolving to, and found my answer to complaint #1 (shitty URL), radio-canada.ca actually points to an IP which resolves to http://simondurivage.ca/ (an old R-C anchor)! They just need to start advertising this URL instead of radio-canada now! (no but seriously, WTF is going on???)

I’ve had a very tumultuous relationship with Facebook. I “deleted” (deactivated, of course) my account two or three times, for different reasons. I did it again about 5 months ago and I find it hard to explain to friends why anyone would want to voluntarily stay away from something that’s so useful and free! There are good things about Facebook and once in a while I miss them, but here are a few that keep me away :

Most people I know aren’t aware that Facebook has shareholders (your average Joe does not follow tech news like you and me), and it’s pretty clear by now that Facebook’s primary objective is to satisfy those shareholders. Making money is what Facebook needs to grow, and they’re pretty good at it. A lot believe that Facebook is either some kind of public service that we are now entitled to (a bit like Google’s search engine), or simply choose not to care about the implications this has. Wanting to make money doesn’t make you evil in itself, but when you do AND hold my very personal data on your centralized servers, I’m doubtful about your intentions.

Mark Zuckerberg thinks our world has changed and people are more open about posting personal information on the Internet. He might be right but 1) it’s difficult to take such his statement very seriously, considering his business grows every time someone creates a new account 2) supposing he’s right – I don’t agree that it’s necessarily a good thing either. I would argue that the Internet has made the need for privacy even more important, and I find it dangerous that sites like Facebook are working so hard to convince people that posting everything about themselves is “normal” and “ok”. I think it’s OK if you want to reveal intimate details of your life to others, but I cannot stand the argument that goes : “why not? everybody else does it anyways“.

I always found it weird that a distant relative, whom I’ve seen perhaps once in the last 10 years, would have access to the same information my girlfriend would on Facebook – just because we’re “friends”. It turns out that my social circles are not that simple. In real life, some people are friends of friends I don’t care for. Some people I will meet, and deliberately try to make them go away. Some people I really like and care for. Facebook just flattens all of this into a single group and has no real understanding of all the subtle variations inherent to relationships. The friends concept completely ignores the complexity of human interactions. I know I can make lists, hide certain posters, block others, etc. I’ve tried and it doesn’t work. You end up like a paranoiac lunatic, “viewing your page as :” to make sure you’re showing this status to her, but not to him, and this picture to him, but not to her. No thanks.

We’ve all witnessed this. And then on some morning, you wake up to what you think is your perfectly curated Facebook feed, only to realize after a few minutes that they changed the front page algorithm and you’re once again drowning in high school material, baby pictures and duckface selfies. I had maxed out at ~100 friends, and after you silence the loud individuals, the political zealots, the life coaches, the social media cross-posters and the frustrated loners, there isn’t that much I feel checking on anymore.

- I seem not to be the only one with a trust problem. Long story short : Facebook deletes nothing (how suprising, right?).

- I’ve visited Facebook and met some of their people. They well all brilliant, extremely knowledgeable and fully deserved the job they were given there. But none of them struck me as being particularly interested in privacy or ethics, which I found a bit odd, given the nature of the data which drives Facebook (data about people!).

- Their lack of commitment to produce a set of clear, unambiguous privacy settings shows they have their priorities elsewhere. These are at best confusing, and some days I felt like Facebook is trying to make me give up (of course Zuckerber’s argument is that nobody cares about privacy anymore, so maybe that figures).